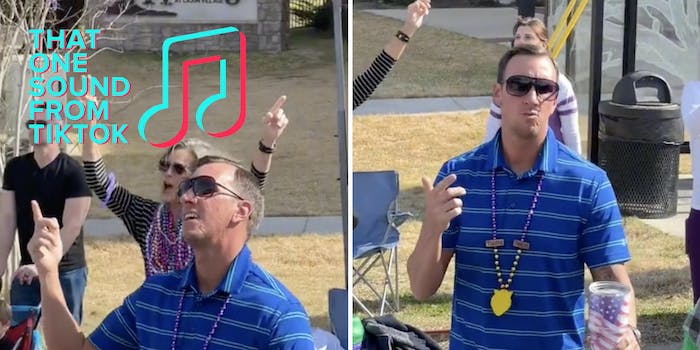 ‘I’ve watched this 100 times’: The origin of that viral ‘Thinking with My D**k’ TikTok

Here's why a 2013 Kevin Gates song is all over TikTok.

That One Sound is a weekly column from senior internet culture writer Audra Schroeder that explores the origin of popular sounds heard on TikTok. Suggestions? Tips? Email[email protected].

This week’s sound is a song that’s been around for nearly 10 years, but a Louisiana photographer just happened to catch a man rapping along to it on Fat Tuesday and sent it into overdrive on TikTok’s FYP. A week later, the original video has more than 19 million views.

Here’s the story behind that viral “Thinking with My Dick” video.

The sound is a Kevin Gates track, “Thinking with My Dick,” from 2013’sStranger Than Fiction. In this case, it’s being lip-synced by a guy in a blue shirt holding an American flag cup. Behind him, a woman claps along, and children can be seen nearby. Thelyricsbeing lip-synced: “Not too pretty in the face, but she super thick/I’m just thinking with my dick/My shit dumb.”

Not everyone used the footage in their TikToks: The “thinking with my dick” part was subverted for other means, but there was also the trend of people expressing their attraction to this man—or maybe just having the song stuck in their heads.

Others did their ownreenactments. But a lot of people were justhorny.

John E. Weatherall III is the photographer and videographer who shot the video, and Steven Barbosa is the guy rapping along. The footage was taken on March 1 in Lafayette, Louisiana, during a Mardi Gras parade. Weatherall was passing by on aKrewe De Krunkfloat, and “just started recording” when he saw Barbosa, he tells the Daily Dot.

Weatherall’s had otherviral TikToksfrom Mardi Gras and community events in Lafayette, but this one truly blew up.

“Overall, I’m just overwhelmed because I’ve always wanted my hometown to be recognized,” Weatherall says. “My goal has always been to document the area I grew up in and capture moments, like Steven’s rapping, so that people can look back on them years from now.”

Barbosa posted the clip to his TikTok a couple of days ago, and he seems to have acknowledged (at least in the comments) that people are thirsting over him. He commented on Weatherall’s TikTok as well.

Barbosa was apparently given tickets to a Kevin Gates concert in Lafayette next month. Gates, who’s from Louisiana, hasn’t yet responded to or commented on the TikTok personally, but hislabelposted it to its Instagram with the caption “#Mood all 2022.”

Audra Schroeder is the Daily Dot’s senior entertainment writer, and she focuses on streaming, comedy, and music. Her work has previously appeared in the Austin Chronicle, the Dallas Observer, NPR, ESPN, Bitch, and the Village Voice. She is based in Austin, Texas.